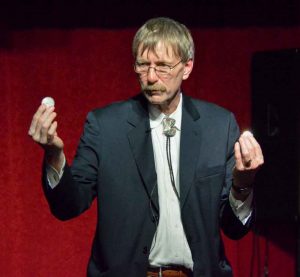 Norman Beck has been many things in life just some of which include: Janitor. Bouncer. Bartender. Writer. Magician. Police Officer. Speaker. Consultant. He’s wowed crowds with exceptional close-up sleight of hand magic skills. He’s moved audiences to adopt change with powerful stories that capture the bets and wagers of individual choices, and the consequences people face because of them.

He’ll tell you that he has one of the “oddest jobs in the world”. He works for a company that provides prize coverage for contingency contests. Think hole in one contests, half-court basketball shots, prize vaults, and super slots.

Norman made his first wager at 14 for  $2.00 and lost.  His second at 16 for $37.00 and lost.  This started him on a lifelong quest to learn about Cons, Swindles, and Gambling.  He never dreamed it would become his job. For the last 24 years, Norman Beck has been the Vice President of Claims and Security for SCA Promotions.  In those 24 years, Norman and SCA Promotions has bet more money than any one person in the world.  The smallest bet was 42 cents and the biggest was $One Billion with a B.  If you can imagine it, chances are Norman has bet on it. He is considered a Paragnosis Expert, which means that his knowledge that cannot be obtained by normal means. In other words, he’s a man who KNOWS the odds, and how to play them.

In the speaking world, every speaker is known for something Norman Beck is known as the guy who can tell you how to…

He has played high-level tournament bridge for his entire adult life and what he’s learned from that he uses a great deal of when leveraging real-life situations.

Because of his unique skill set, storytelling ability, his gambler’s mystique, and the magic of a sleight of hand expert — Norman woos audiences like no one else can!

Norman is “hard to get and easy to work with”, which means his calendar is filled with projects around the globe, but his genuine personability and ease to collaborate with makes him a meeting professional’s dream. He customizes every talk to the needs of his clients, and audiences are left feeling more connected and empowered than they were before Norman stepped on the stage.

I received great feedback from our partners who attended your presentation at our annual meeting. You are very entertaining, and your message was terrific! –Stephen Riggs, Carr, Riggs, & Ingram